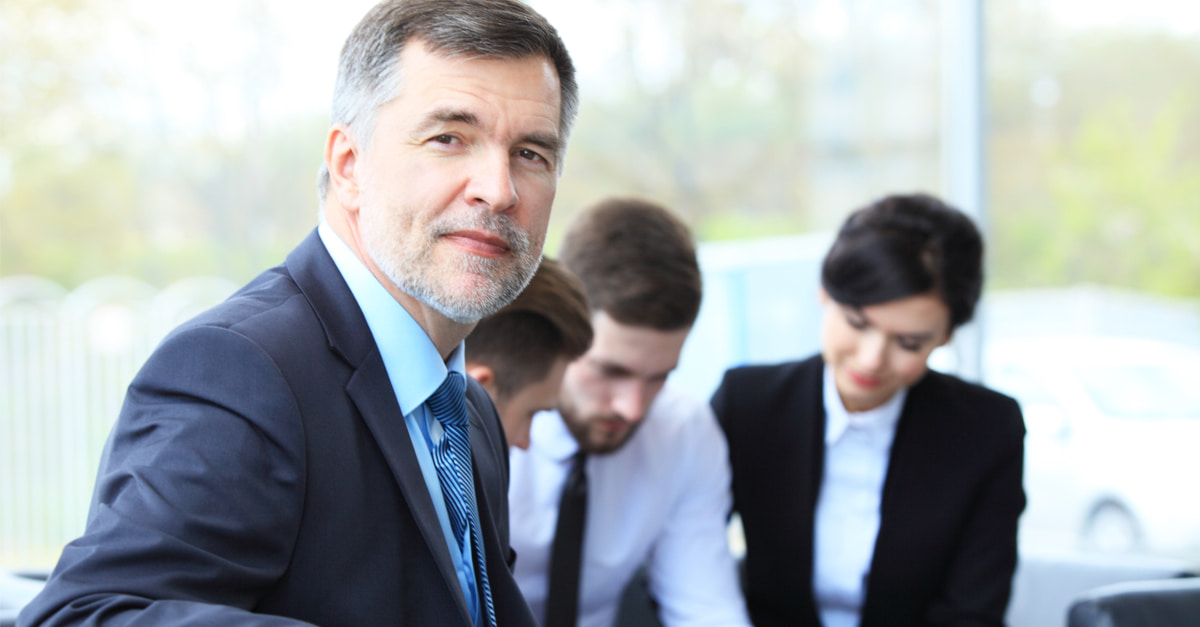 Just as there are innumerable types of leaders, there are just as many types of executive team. Many factors influence the way the team should be structured to carry out its collective leadership task: organisation size, industry, geography, and of course, the kind of strategic challenge the business faces.

Irrespective of the wider context, there are a set of characteristics that exist in the most successful executive teams; those teams that have a disproportionately strong impact on the success of their businesses. These characteristics include how the team go about their collective leadership, where they focus their time and attention, and where their central allegiances lie.

We can contrast two types of executive team based on these characteristics. We call them the ‘The Pillar’ and ‘The Weave’. 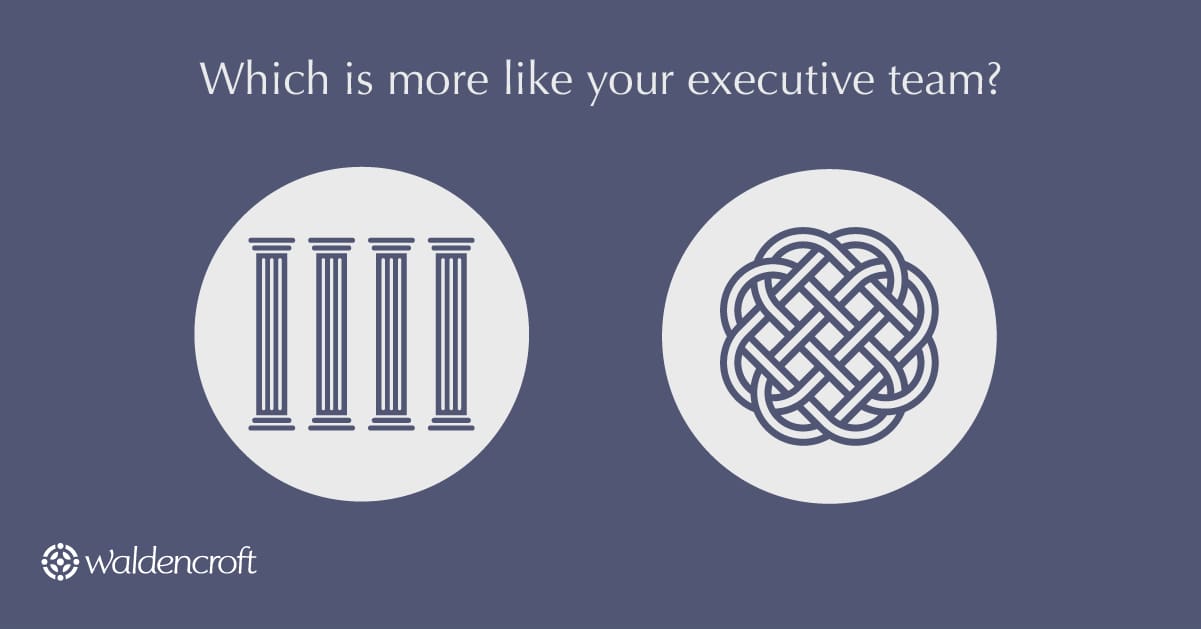 The ‘Pillar’ is the traditional model for the executive team that still dominates around the world. It’s based on team members coming to their executive task as talented and dedicated functional specialists/business unit leads who still hold primary responsibility for their own part of the business. In effect, they sit at the top of their own pillar.

In a pillar executive team, executive team members see their primary responsibility, and the place where they add the greatest value, as their functional/operational area. The leader of the team (the CEO or equivalent) may draw on the input of some of these executives when major strategic decisions have to be made, but it isn’t a core responsibility of the entire team.

Instead, the meetings of a pillar executive team are typically characterised as a place to share information and updates about what’s happening in the various functional areas and business units. They can be highly convivial, and do occasionally look at pan-organisational issues. But each person is essentially there to represent their own area and add value through their specialised functional knowledge. Even when strategic issues are brought, it tends to be those with specialised input who most contribute to the problem solving and decision making. It’s rarely a full-team effort.

This executive team structure follows most organisational design where functional and operational silos are accepted as the most efficient way to get work done. But there are significant unintended consequences for executive teams uniformly adopting this structural design. Here are my top four.

Consequence #1: You inadvertently create an Executive ‘B Team’

In a pillar executive team, each member sees their direct reports, in their own functional or operational area, as their ‘A’ team. They are co-located, spend most of their time with, and gain their professional identity from being the leader of this team. So, for example, first and foremost the CFO is a finance lead, a gifted accountant leading a team of other gifted accountants. Likewise with Operations, Marketing, etc.

The natural consequence of this is that each leader will prioritise their part of the business over the whole. Functional/business unit success is measured and rewarded, even if it is at the expense of the organisation as a whole. And this in turn leads to many of the other consequences noted below.

Consequence #2: You focus on in-and-down at the expense of up-and-out

By their nature, functional areas and business units have been created to look after one particular specialisation, product or geography. And when an executive team is structured in pillars, it stands to reason that the leaders at the top of each those pillars is focused inwards and downwards.

This in-and-down focus in turn means there is often insufficient attention given to the strategic, enterprise-wide up-and-out focus needed if the organisation is to have an ongoing awareness of its strategic environment.

If you accept that the key differentiator between the executive team and every other team in your organisation should be its enterprise-wide focus, it begs the question, if your executive team isn’t focused up-and-out, who is?

The in-and-down impetus is more likely to result in executives seeing their colleagues as competitors for scarce resources within the business. This can be in the form of financial resources, or talent resources.

If your experience of the annual budget round feels like a rugby scrum between business areas, it’s likely that your executive team’s structure is exacerbating a siloed mentality.

Talent hoarding is another such symptom. Rather than the best people being moved to areas where they can add the most value, they’re held in functions or operations because it best serves the leader of that area. This is both bad for the entire business, and stultifying for the people who are used as pawns in a selfish talent-grab. This is one of the ways in which organisational dysfunction is created when silos develop and are strengthened by executive-level competition.

Consequence #4: You are constrained by reductionist problem-solving

Many, if not most, organisational problems are systemic in nature. This means both the problem and the solution are interdependent on other parts of the organisation, and often to your external environment. When executives don’t consider these things together, problem-solving will be reductionist in nature, focusing on only small parts of the problem. This rarely works, and is one of the reasons so many organisational change efforts fail. When executives think holistically and map the alignment of change across the organisation, they are far more likely to solve their systemic problems.

Now that we’ve explored just some of the potentially dire consequences of the pillar executive team, what then is the alternative? We call it the Weave.

The ‘Weave’ represents an executive team in which the members are truly interdependent and place just as much, if not more, importance on their ‘enterprise’ responsibilities as on their functional/business unit responsibilities. The make-up of a Weave team can be exactly the same as that of a pillar. What’s different is the attitude, attention and identity of the team members.

Weave teams deploy their collaborative intelligence to solve organisational issues and to work as one on the challenges the business faces. To do this the team has a strong, unifying enterprise up-and-out purpose that is universally shared by team members. The team are focused on challenging, consequential work that is visible to their key stakeholders, such as the Board. And, their recognition and reward is based on the collective effort of the team.

Besides the practical things that can be done to create a Weave team, there’s an important psychological transition that team members have to go through to perform well in a Weave design. Each team member has made the developmental transition from a functional leader to an enterprise leader.

To do this, they’ve had to become, albeit temporarily, a novice again – giving up the comfort of their significant career expertise and technical skills to develop new, full-system ways of leading. This is the key developmental transition for new individual executive leaders and the collective development agenda of almost every executive team that I’ve worked with.

But the effort is most definitely worth it. Just as there are unintended consequences of the pillar structure, the weave structure has positive consequences across the entire organisation. Again, here are my top four.

Benefit #1: You have greater strategic agility

It was Jack Welch who said: “an organisation’s ability to learn, and translate that learning into action rapidly, is the ultimate competitive advantage”.

It is all very well to set a well-planned, bold strategic direction, but the reality is that alongside well-executed strategic plans is the pressing need to be agile and responsive to challenges, changes and chances.

If your executive team meetings are jam-packed with functional area and business unit updates, and presentations and papers on operational issues, where is the space for genuine strategic conversation?

Certainly, the best executive teams I’ve observed are the ones who give space and permission for creative – and sometimes random – subject matter to be inserted into the conversation, because this is where creativity and innovation reside.

We are all required to lead in an environment that is increasingly turbulent and disruptive. Indeed, the term VUCA (volatile, uncertain, complex and ambiguous) has gained such traction because we recognise it so clearly in the nature and frequency of the organisational challenges we face.

Such challenges cannot be tackled by individual leaders, irrespective of their skills, experience or talent. Complex problems can only be tackled with a wide representation of views and perspectives. But it takes practice. Executive Teams who see their enterprise-wide responsibilities as crucial for organisational success and who structure their meetings on these issues become adept at having conversations about VUCA-type issues in ways that enables system-wide solutions.

The growing ubiquity of values such as collaboration, integrity, accountability and learning speak to an inalienable truth that these are important conditions for people to work well together.

Whether these things are values statements written on walls and no more, or become the genuine way people operate together, is largely down to whether they are embodied and role-modelled consistently and congruently by leaders.

For an individual, it matters most that a person’s direct manager role-models the culture, but those mid-level leaders take their lead from elsewhere – and the most visible group is the executive team. If your executives doesn’t collaborate and take collective responsibility for organisational outcomes, you have very little chance of it happening elsewhere.

One of the barriers to strategic renewal is that people get stuck on the implications for their functional or operational area. So it stands to reason that any initiative that poses a threat to an individual area will be met with resistance.

People look to their leaders for signals about resistance. When leaders are ambivalent about an organisational change, their people will follow. But when executives are working across the organisation, they move our of parochial concerns and see the benefits of change, even at the expense of their own functional area. This massively increases the chances of implementing change successfully.

Weaving the executive team together

A well-woven executive team is one where functional/business unit responsibilities are balanced well with enterprise-level responsibilities. It’s not a case of either/or but both/and.

This requires significant effort by such leaders because often there are inherent tensions between the two. But given the skewed focus towards functional leadership, it is now essential that we redress this towards enterprise-wide executive leadership. So how does a CEOs and a CHRO work to develop a well-woven executive team?

Here are some steps you can take to get you started:

The consequences of a pillar structure in your executive team creates a kind of strategic fragility, putting the organisation at risk and stopping it being optimised for excellence.

A focus on excellence should extend to your executive team as much as any other aspect of your business. But excellence in executive teams, like everywhere else, comes through focused effort and attention.

Globally, investment in leadership development is estimated to be worth $366 billion. But the vast majority of this is focused on individual leaders in functional and operational roles. Attention needs to shift to executive leaders as a collective unit of performance, focused on enterprise leadership.

Does this apply to you? Within your own executive team, are you truly a team, with a collective focus on the enterprise and a set of meaningful consequential and interdependent tasks? If not, and if you want to avoid the unintended consequences I’ve outlined here, perhaps this is where your next developmental focus needs to be.