Executive Leadership at the Perilous Peak 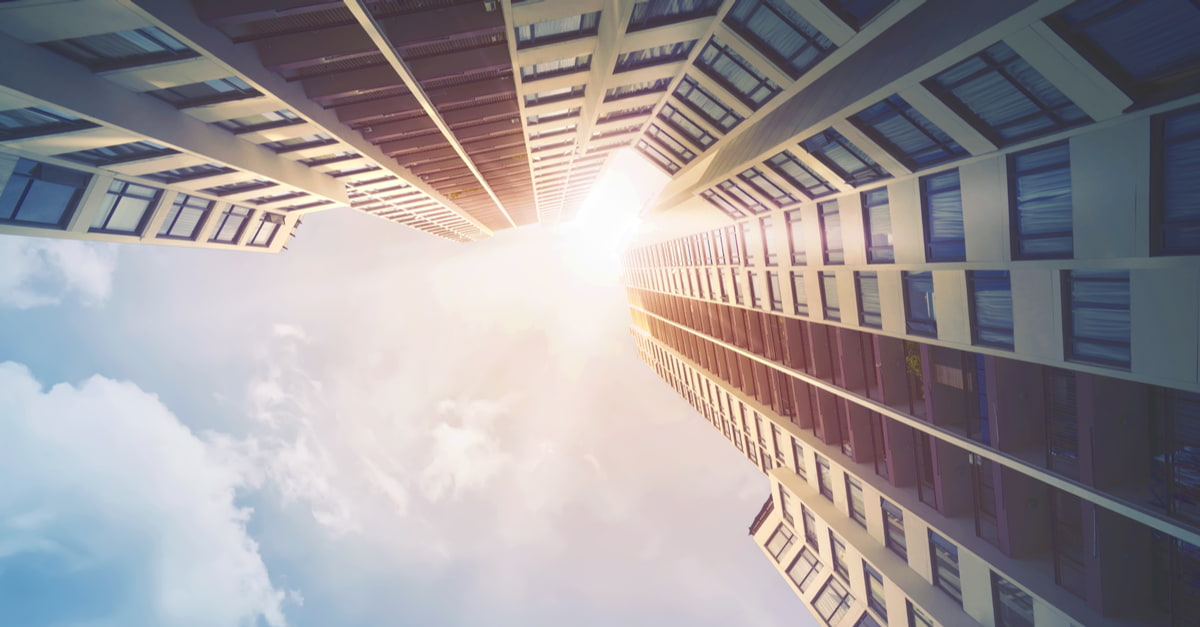 Meet Robbie, a 50-something second-time CEO. Values led, competent, trustworthy. He’s well-liked and respected by his people and his team.

A year ago, Robbie, was experiencing many of the challenges that occur when operating at the organisational peak.

The structure of the industry his business operates in was changing. And it was hard to keep up with rapidly changing customer expectations. Some of his former competitors had been acquired or had failed. The expectations on the business to be agile and sustainable, whilst remaining profitable in a traditional business industry meant that the entire business model needed a rethink.

Robbie had the insight and wisdom to know that the task at hand wasn’t a one-person job. Yet when Robbie looked to his executive team – the leaders he needed to be with him on this journey – he realised they didn’t see their primary role as an executive leader. They were still predominantly operating in execution mode as functional leads. He was feeling frustrated and isolated.

Making the shift to enterprise leadership

As leaders move to progressively more senior levels, the terrain changes, the context changes, and what’s required to survive and thrive changes too.

The most successful leaders understand that they have to adapt their ways of thinking, acting and being at each stage of their career progression to meet the requirements and responsibilities of the stage they’re at. We’ve all had experience of leaders who fail to make the leap. They’re given the promotion, but they’re unable to let go of the things they were competently accomplishing at the pervious stage. So, they stay stuck. Operating at the level below their current pay grade – not achieving what’s required and frustrating the people they lead.

It’s true there are perks and privileges at this level – and a hike in renumeration. But the peak isn’t a cosy place to occupy. The environment is perilous indeed.

For a start, the environment is more complex and challenging than ever before. The scrutiny of CEOs and executives is immense; the rise of social media and open networks of communication make it easier for executive decision making to be dissected not just by the business press, but by anyone with a smartphone.

In the West, company longevity is decreasing. Numerous studies show[1] that the average age of a company listed on the S&P 500 has fallen from 61 years to 18 years today – and this downward trend is continuing. In the FTSE 100, only 28 of the companies that were on the Index in 1984 were still there in 2017.

Alongside a decrease in corporate longevity is an emerging picture of increasing CEO turnover. The global median tenure of a CEO is just five years[2], and the UK doesn’t even reach this low bar. Shockingly, 52% of CEOs are sacked.

Statistics from the Corporate Executive Board highlight that 40% of new executives fail within 18 months. Of those, about 3% ‘fail spectacularly’ whilst a whopping 50% ‘quietly struggle’.

To operate well at the perilous peak, it’s clear that something needs to change.

Robbie’s team was made up of seven highly competent functional experts. They were loyal to the company and to Robbie and (in the main) they got on well together. But it was a team that was underpinned more by competition than by collaboration. Budget time was a bun fight for scarce resources; each department pitting itself against the other so it could move forward with its pet projects. Tensions sometimes arose, spikey rebukes and disagreements.

Two things characterised Robbie’s executive team meetings. The first was that the meetings themselves were stultifying. A round robin of functional updates spattered with a few enterprise-wide issues rather than a place to collectively go deep on the major challenges facing the business. Everyone wishing for it to be over.

The second, was the toxic habit of the meetings after the meeting. After every executive team meeting there was a series of informal ‘real’ meetings where executive team members shared what they really thought about issues, dissected what had gone on, and then made their real commitments and plans.

The perilous peak contains a paradox

Leaders often fail to fully take up their executive role at the peak because it means, in part, letting go of their area of key competence: the very know-how that had gotten them to where they are. It feels safer to stay with what’s known.

Most leaders at this level are making their primary contribution to the business by focusing on their functional area or business unit, and many are highly effective at it. But it’s not enough to operate well at this level.

Execution: a focus on the functional

A focus on execution is based on the here-and-now; on the operational day-to-day issues that keep the organisation moving forward. The problems faced here are usually concerned with the present and are ‘technical’ in nature – that is, they require skills and expertise but there’s usually a ‘right’ answer. Many of these roles can be done individually, although not exclusively. It’s a vitally important role and not one that we’re advocating any organisation stops doing.

Adaptation: a focus on the executive

But the strong focus on day-to-day execution needs to be balanced with attention towards adaptation; to what’s ahead. It represents a shift in executive attention from here-and-now to there-and-then. That is, a future-focus based on helping the organisation adapt and evolve to its changing circumstances. The challenges at this level are complex in nature, requiring a very different type of leadership. 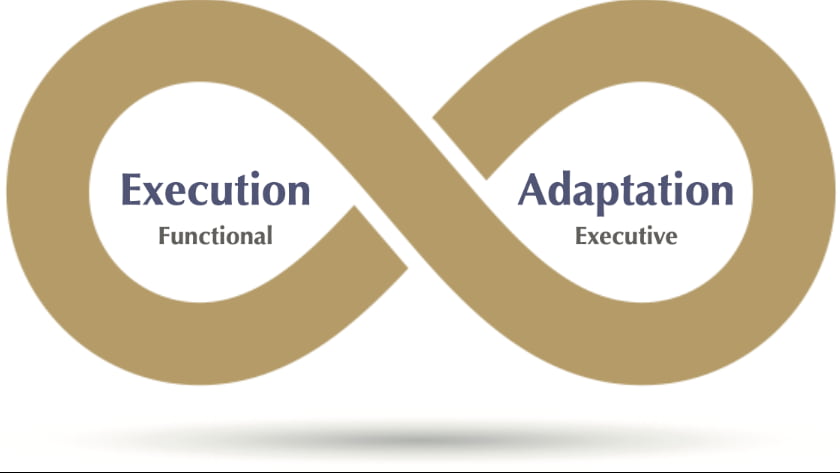 The challenges at the peak of the organisation need the focus and attention that is the responsibility of the executive team. No other team has enterprise-wide obligations. It’s literally why an executive team exists.

Enterprise leadership requires executives to purposefully move between execution and adaptation – between their functional obligations and their executive responsibilities. They do this by pulling their considerable talents and working collectively to solve problems.

We believe that for executives to be effective in this context, it requires them to deploy what we call full spectrum problem solving. That is, solving issues that relate to the entire enterprise within its full context.

Full spectrum problem solving is holistic in its outlook, requiring leaders to cast a wide temporal and stakeholder net. As such, it requires the entire brainpower of an executive team, one that is strengthened by diversity in all its forms.

But here’s the thing. In order to do full spectrum problem solving, you need multiple heads, hearts and hands working together in this endeavour. It represents a shift from multidisciplinary leadership (lots of specialists focused on their own area) to interdisciplinary leadership (bringing those different perspectives to bare on enterprise-wide problems).

With pressure from the Board mounting, Robbie was highly motivated to turn the business around. But the change wasn’t happening fast enough.

When we began working with Robbie, it was clear that his executive team colleagues were too focused on execution to the detriment of adaptation. Indeed, all seven members of the team estimated that their execution focus got more than 80% of their time and attention. And they perceived that their ‘primary team’ were the teams they led in their functional and business unit areas rather than their executive team.

Research shows that only about 12% of executives are truly enterprise leaders.[3] And we believe that the reason why current investment in developing enterprise leaders isn’t paying off is because it’s focused on the individual, out-of-context instead of working with the entire executive team on the real challenges they’re facing. Or on happy-clappy team building that doesn’t get to the root of the issue.

This is where Waldencroft’s Integrative Framework of Team Effectiveness comes in. Based on the conditions of effectiveness in senior teams, it’s the starting point for executive teams who want to begin working together more effectively towards enterprise leadership.

By systematically doing the foundational work of clarifying why the team exists (its purpose) and being clear on the tasks that will advance the purpose, the team can review its structure (its meeting cadence; what feeds into it and where its output goes) and the composition of the team.

Only then is it ready to explore the relational aspects of the team – such as levels of trust, groups norms to improve how people in the team interact. In our work, we’ve seen everything from mild interpersonal issues that were resolved quite quickly, to teams where there was a deep relational rupture within the team that took very careful handling to improve.

Once the team have good relational foundations in place, they’re able to get to work on the practical matter of getting challenging work done and how they (and everyone else) knows if they’re succeeding. This is done in the practical domain. 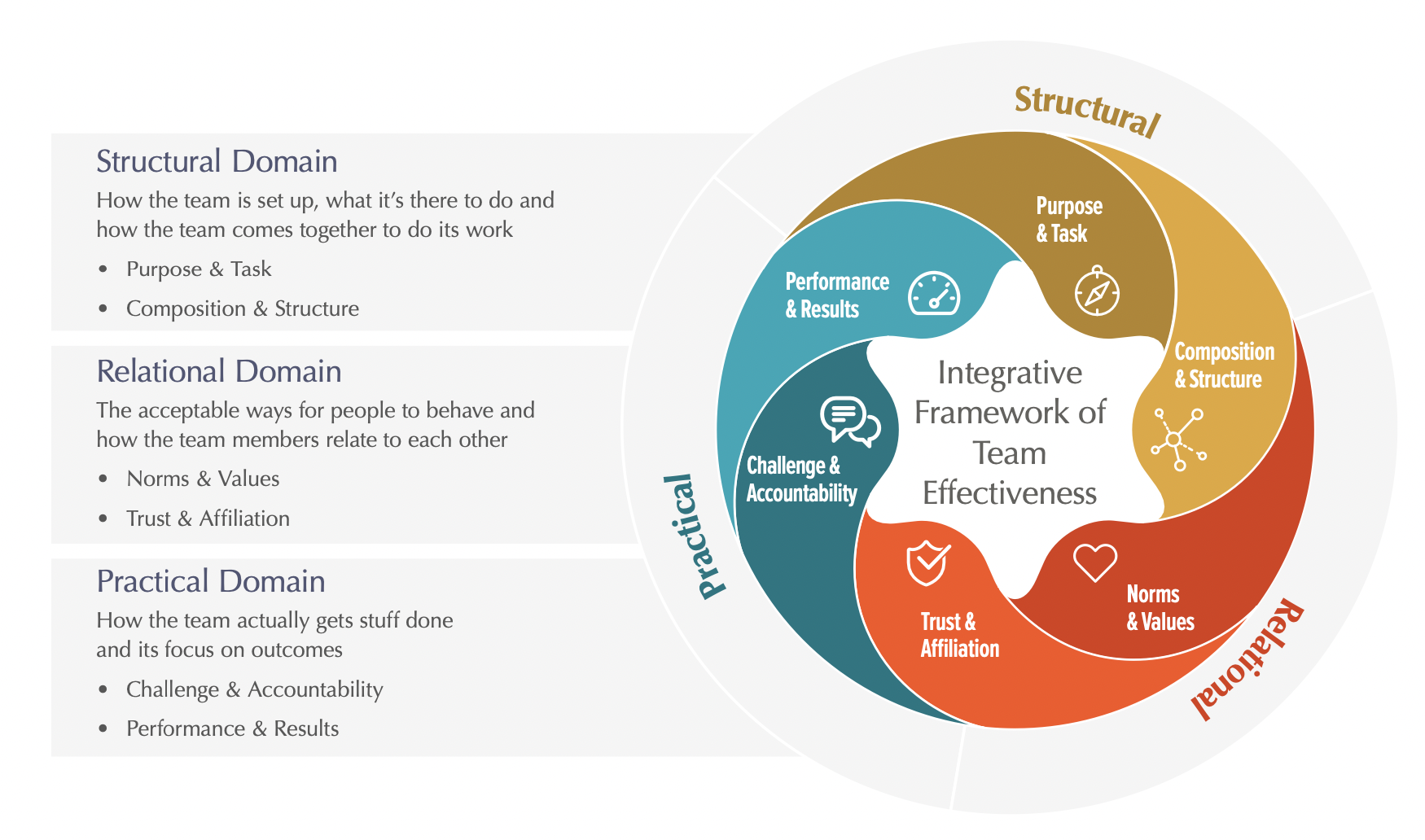 The characteristics of leading at the peak

Climate change; tech innovation; pandemics; cybercrime; shifts in consumer values and behaviour; hybrid working; and the digitisation of everything.

These are just some of the challenges facing business today. And they interact. They’re part of a larger, interdependent whole that’s characterised by unprecedented instability and a warp-speed pace. Even events that occur far in time and geography can have an impact on your business locally.

Within this context, we believe there are five areas of focus for an effective executive team to operate well at the peak.

Once we’d helped Robbie and his team put the foundational conditions for high performance in place, they had the time, the space and the team dynamics to tackle what we call the Enterprise 5 – the challenges that face every leader doing enterprise leadership:

Complexity: providing the capacity and capability to work with complexity and to effectively tackle complex problems.

Foresight: developing the collective ability to anticipate the threats and disruptors that may affect the business so it can inform the front-end of strategy.

Ethics: shifting the focus from thinking that ethical challenges are binary to effectively grappling with ethical conundrums and making purposeful choices, even when they’re difficult.

Stakeholders: engaging in socially responsible ways with myriad stakeholders to find workable solutions for all.

Risk: helping the team understand how to proactively work with non-linear risk; how it can be identified and mitigated in a way that’s different from typical risk management.

Stepping up to lead at the peak

Robbie is a real CEO. The case I’ve just described illustrates what it’s like to operate at the organisational peak.

A year on, Robbie’s team are effective at moving purposefully between their execution and adaptation responsibilities. Robbie and the team have been able to make significant progress on the strategic challenges facing the business and the Board is reassured that the team have things in hand.

As well as greater organisational outcomes, Robbie’s team report that now they’re working effectively, there’s less stress, less burnout, stronger levels of support, and lower churn. They’ve created the space for their functional heads to step into the space they’ve vacated and they in turn are reporting higher levels of engagement and better organisational outcomes.

When Robbie and I spoke last week (he agreed to be used in this case study but prefers to stay anonymous) he looked more relaxed, happier and spoke of being more optimistic about his tenure as CEO and the legacy he’ll eventually leave.