How to conspiracy-proof your leadership 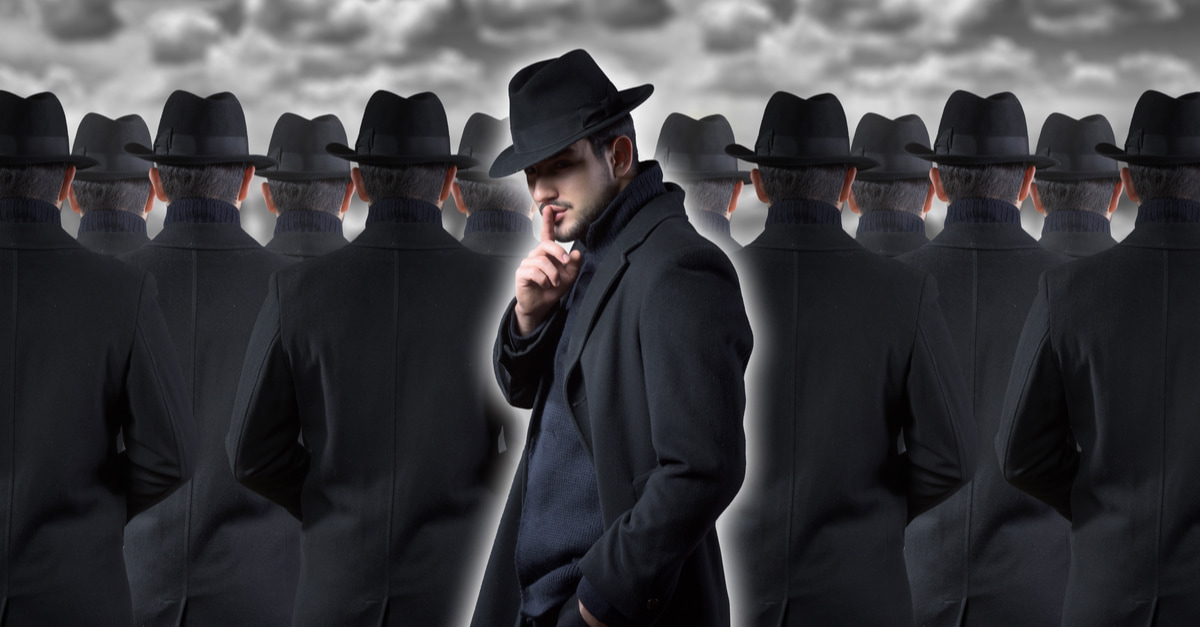 It seems that wherever you look these days, you’ll find more and more stories about the pervasive belief in conspiracies. Whether it is QAnon, shape-shifting reptiles, or Covid being the result of 5G, we live in a world of conspiracy theories as people try to account for what’s really going on. And it’s getting worse.

We have moved beyond seeing the odd conspiracy theory pop up now and again. We now live in a bona-fide conspiracy culture, that that culture cannot help but permeate the boundaries of the organisation that you lead.

In a world in which conspiracy theories have become more mainstream, with enough broadcast platforms to make their number seem like a critical mass, we can see they lower trust in every facet of life. We now find ourselves questioning everything, just incase we’re having the proverbial wool pulled over our eyes.

And if more and more people are viewing the world with more caution and scepticism, it’s not unreasonable to assume that your change initiative will be met with more hostility. Acting like a brake on your progress.

In April, the mobile phone giants Vodafone, O2, Three and EE issued a joint statement condemning the vandalism of 5G masts following the conspiracy theory that there was a link between 5G and the outbreak of Covid-19.

Masts were vandalised with an impact on both the cost and schedule of the 5G rollout. More worrying is that staff were put at risk having to go out and repair the damage in the throes of the pandemic’s first peak.

This is an example of an outside-in conspiracy, where conspiracies circulating in the wider environment spill over to impact your organisation and your people. Another example is the pressure put on the NHS due to illness related to ‘anti-vax’ conspiracies.

Just as insidious are the conspiracies circulating inside your organisation, thwarting you as you manage change and try to make progress in difficult times.

In the business world, conspiracy beliefs include ideas that leaders have a hidden agenda, with goals that benefit themselves rather than the organisation as a whole. Or that leaders are untrustworthy, hiding important information or leaking information that should be kept confidential or at least treated sensitively.

Believing in a conspiracy isn’t confined to those on the fringe.

Researchers have noted that believing in conspiracy theories is a way to explain distressing events, particularly among groups who feel powerless or voiceless. If you feel invisible, ignored, overlooked and misunderstood it stands to reason you won’t trust those who have power and authority.

And while each conspiracy may differ in content, consistent is an ‘underlying conspiratorial mindset’. This mindset is particularly activated in uncertain, fearful and threatening situations.

Just the like the one we are in now.

In the run-up to the collapse of Enron there was much organisational chatter about what was going on. Seen up close at the time, it might have been easy to dismiss it as gossip or conspiracy theory, but even in people’s imaginations nothing was as despicable as the truth turned out to be.

In the end all that was left was a disgraced executive, an organisation in ruins, a pension fund obliterated and their professional advisers, Arthur Andersen, discredited and destroyed.

And that is the problem with conspiracy theories. Every so often, they turn out to be true.

So while you might be foolish sometimes for believing them, at other times you’re foolish for not.

In highly uncertain times, we all look for reasons (theories) why we are in the situation we are in. We look for ways to make sense of the complexity and uncertainty that we’re experiencing. And in so doing, we apply a simple heuristic (a rule of thumb mental short-cut). In this instance the heuristic we apply is: ‘what’s happened in the past?’.

If our leaders have proven themselves over time to be trustworthy, to have deep empathy for everyone in the organisation (not just those in the executive suite), and if they act with consistency and solid ethics, we’re more likely to assume that’s how they will behave in whatever change or crisis we now find ourselves in.

Of course, the opposite holds true also.

So the work of managing a crisis, leading a change or aligning people to organisational goals happens beforehand. It’s like a bank withdrawal; if you have diligently paid into that bank account over a long period of time, there are sufficient funds to draw down when you need them. If you haven’t paid in, then you’re in trouble.

In environments with low levels of trust, empathy and ethics, people start to lose sight of rational logic and instead go to darker places as they try to explain distressing events. We’re hard-wired to be alert to threat. Our brain doesn’t care if we’re hunting in the middle of an ancient savannah or sitting comfortably in our modern day organisation; it will default to keep us safe rather than sorry.

So our threat activation system is switched ‘on’ and we are on the lookout constantly for new ways we might be in peril. These are not necessarily rational thoughts, but they make sense to the primitive part of our brains whose job it is to keep us safe.

What, then, are the conditions you need to create, as a senior leader, to diminish the chance of conspiracy theories being the default explanation for what’s really going on?

First of all, people get behind organisational goals and change initiatives when they believe them to be good and viable. And for that to happen, you need to create a culture based on three conditions: truth, empathy and ethics.

Much has been said about trust in leadership, but its relevance here is in consistency and predictability. If you are known to act in a certain way again and again, your people will assume that is the way you’ll continue to act. Whether your reputation is positive or poor, ‘the best predictor of future behaviour is past behaviour’.

If your people distrust you, they are likely to distrust everything you say, treating your words with scepticism. Trust is not an objective thing; it’s a subjective feeling. If you have created the conditions where people don’t trust you, simply bombarding them with facts and instructions isn’t likely to help.

We used to assume that a conspiracy was caused primarily by a lack of knowledge, so people just needed more scientific or expert knowledge to be convinced. But now we know better: expertise and science are the casualties of conspiracy theories.

Leaders who habitually adopt an authoritarian style create a work environment where people feel dominated, controlled and marginalised. These are low-trust environments and they contribute to a culture of job insecurity and blame.

Cultivate trust by being known for your word and for acting for the greater good.

If a leader feels like ‘one of us’, people are more likely to empathise with them, understand them and have higher trust in them. When you can put yourself in your people’s shoes and speak to their lived reality, you are seen as credible and believable and, in turn, you are more likely to be believed.

Hands-off leaders who don’t intervene until absolutely necessary are often considered indifferent and lacking in care and attention. Left without clear feedback and guidance, their people are left to ‘make it up’, and so the conspiracy theory is germinated.

A conspiracy theory is a kind of anxiety-management strategy. It’s a comforting way to deceive ourselves because the story – the conspiracy – is less anxiety-provoking than working out our place in a world that is hard to understand, and even harder to do anything about.

This situation is created easily and quickly wherever you leave a vacuum of information – however innocently intentioned. Sitting in the executive suite, it’s easy to decide that having no new information means you don’t need to talk to people but, in the absence of active leadership, people in stressful situations will fill in the blanks for themselves.

Low empathy is often built into organisations. Stratospheric executive pay, low levels of diversity in senior management, perks and rules that some people enjoy and others don’t – these things all are likely to breed distrust and erode a sense of empathy. There can be some distance, but it shouldn’t be so great that neither group can understand the reality of the other.

When people who ‘lead’ and the people who ‘do’ are very different, it’s harder for both groups to empathise with each other. It isn’t a huge leap from that lack of empathy to a more sinister feeling that the ‘in-group’ is keeping something from the ‘out-group’.

Display empathy by communicating at the level of concern for your people, communicate often, in way that suits your people rather than suiting you, and walk alongside them on the journey.

Adhere to your values

Your values, and the way you lead, will be tested in difficult times.

You will be measured on how credible, honest, reliable and trustworthy you are – not in the good times, but when your company is in crisis and things are hard.

In good times, we trick ourselves into believing that ethical decisions are a matter of black or white. When reality hits, however, the issues are very often located in a grey area between and the difficult trade off that’s often required.

If you have espoused a value in the good times, your people will pay very close attention to what you actually do when things are difficult and the chips are down. They will be less likely to forgive you for the challenges – for that nuance – that the decision creates, and will look instead to how consistent you are with what you said you believed.

Progressive leaders do two things: they don’t make promises in good times that they know they one day may not be able to keep, and they are honest about the challenges they face in the bad times.

The simple truth is that if you go against your values when times are hard, you have created the perfect conditions for mistrust and poor credibility. Don’t create simplistic values that are predicated on a world operating in back in white. Create values with the ethical grey areas in mind.

It doesn’t have to be this way

How people in your company perceive you and your senior team can predict the existence of conspiracy theories in your organisation.

This issue is particularly important now. We can be said to live in a conspiracy culture, a ‘fake truth’ reality where authority and expertise are distrusted. And yet, given the high levels of uncertainty, people in our organisations are looking for an anchor more than ever.

They are looking for a leader who will help to ameliorate their pain and anxiety; a leader who can be with them in the thick of it and help to find a way through; a way to make sense of the confusion and to help people to move forward positively together.

Now, more than ever, business needs good leaders to step up and make this space. And if you don’t, someone else will.