What can algorithms teach us? 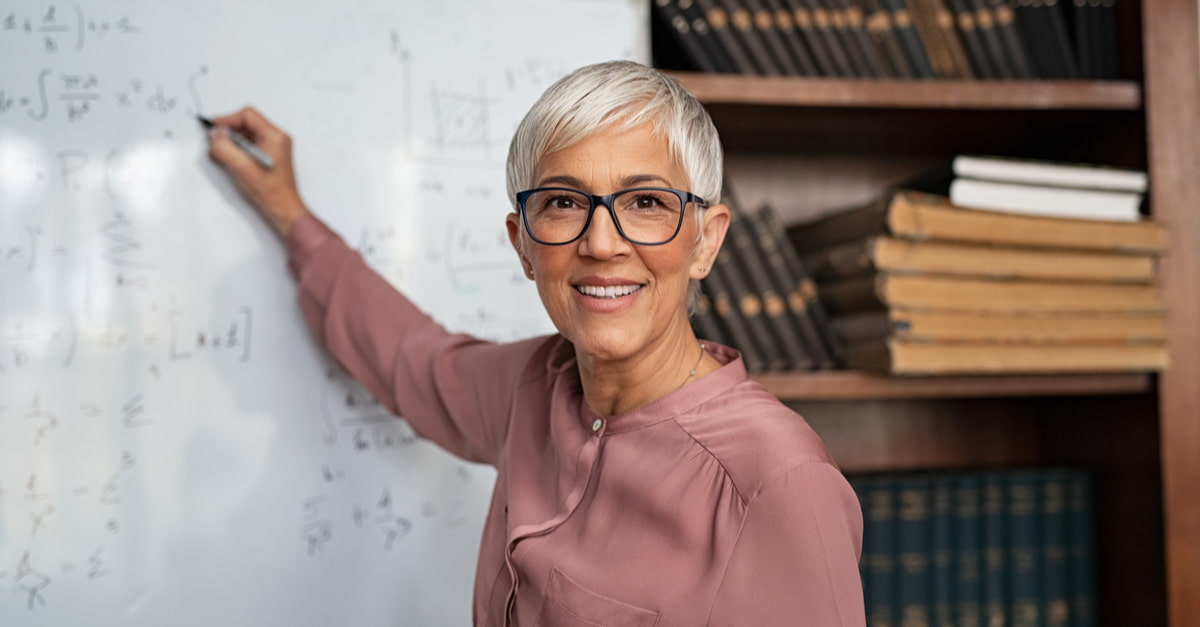 If the last fortnight has taught us anything, it’s that while our formal schooling may be important, there are lessons for us to learn at every stage of our career.

The big news story of this last couple of weeks has been the grading debacle in the UK’s schools, given that Covid has prevented students from sitting their Highers or A level exams as usual. Initial predictions by teachers were passed over in favour of an algorithm, which purported to apply absolute consistency when awarding grades to each student.

In many cases, the grades predicted by teachers were adjusted downwards – dramatically so for some – by this computer modelling. And the response was dramatic. By taking to the streets and refusing to accept grades downgraded by algorithm, our young people taught the holders of highest office what they were – and were not – willing to accept. Every government across the four nations capitulated, and reverted to teacher-based grades.

Life teaches and instructs. And right in this moment, I believe there are profound lessons for business leaders to learn from this.

Unable to sit exams during a pandemic lockdown created a huge dilemma for awarding bodies. How could they fairly represent student grades without invigilated proof of those students’ attainment?

Initially, a two-pronged approach was adopted: teachers first assessed their individual students, based on a range of sources such as written submissions and previous exam grades, to give their best prediction of how they thought their students would perform in a final exam. These results then went to the awarding bodies for moderation – a process that used an algorithm.

As decision tools, algorithms act on well-defined, implementable instructions that can be applied to a data set. But the algorithm doesn’t think for itself. It doesn’t have values, priorities or preferences. You have to design those in.

In this case, the rule designed into the school exam grade algorithm was simple: no grade inflation. The process of flattening the curve was based at an institutional level, not the individual level. In some cases, this meant the brightest students from the worst schools were marked down not on their own performance, but on the historic performance of their school.

If the objective of the exercise was that results should fairly represent what students would have received under normal circumstances, then the fact is that teacher assessments fared no better.

Nervousness by government ministers and awarding bodies that teachers’ grades may not be representative was completely reasonable and well-founded – proven by the resulting grade inflation was 39 per cent. This is not because teachers are untrustworthy or because they were deliberately gaming the system, but because human beings are notoriously bad at this sort of predictive work.

Daniel Kahneman, the Nobel Prize-winning behavioural economist in the area of human judgement in decision-making, made the observation with colleagues Paul Slovic and Amoz Tversky that: “People rely on a limited number of heuristic principles, which reduce the complex tasks of assessing probabilities and predicting values to simpler judgemental operations. In general, these heuristics are quite useful, but sometimes they lead to severe and systemic errors.”

What are those errors? Essentially, they all reflect bias in our decision-making. The term unconscious bias is firmly in our lexicon already, having been highlighted in particular by the diversity conversations of recent years. And there are two types of unconscious bias that may well have impacted the grade inflation by teachers.

The first is affinity bias, whereby we are more likely to be biased in favour of people who are like us and with whom we feel a stronger affinity. The second is confirmation bias, which creates a tendency to search for and interpret information that aligns with our preconceived ideas. For example, this might mean assigning a higher mark to Mary’s work because we know she is a diligent and serious student, while marking Julie down for work of the same standard because we know Julie typically doesn’t seem to try so hard.

Against a backdrop of wanting the children they teach and care about to do well, teachers almost certainly experienced an additional desire: for the school to do well. The grades that a teacher predicted were not only grades on the student. It was also the teacher providing a mark of their own teaching ability and the school they were part of.

Let me stress, this is not a failing on the part of teachers. Indeed, I believe the profession has worked carefully and diligently throughout Covid, in the very best interests of our children. But as human beings we are wired to make cognitive short-cuts like those outlined above.

So which was worse? Grades that we knew would be inaccurate due to human beings’ inherent bias, or grades that were ‘corrected’ by an algorithm?

It would seem that government ministers and officials framed this as a Hobson’s Choice, a term popularised in David Lean’s 1954 movie of the same name. It relates to the necessity of accepting one of two equally objectionable alternatives.

The Hobson’s Choice in this instance was to accept either a well-intentioned but skewed teacher assessment that would lead to grade inflation, or a levelling process via an algorithm that would work at an institutional rather than individual level, potentially downgrading the very brightest students from the most deprived areas. (And these are exactly the outliers for whom educational attainment would have the most profound impact.)

A failure of leadership

Some say the algorithm failed. But the algorithm did exactly what it was programmed to do. The failure was in leadership in both government and the examining bodies.

Specifically, the leadership failure was the failure to think. Confronted with a complex problem, it appears the leaders involved went about solving it as if it were merely a complicated one.[1] They applied the logic of a rational method to a problem wholly unsuited to that approach. Here’s why.

Grades that are acquired through submission of marked course work and exams can, reasonably, be said to be fair. They are fair because they are objective. This is the realm of what we call a positivist methodology – an approach that uses ‘scientific evidence’ as proof. In this model, as it relates to exams, the criteria for passing is shared by everyone sitting them, irrespective of who the student is, where they come from or the school they attend. The data is objective and can be judged by different sources, all using the same criteria to come up with the same grade (within a reasonable margin of error).

This year, because of lockdown and school closures, the objectivity of this positivist process became impossible, because students had not completed their course (and prelims, or ‘mocks’, are a notoriously bad predictor of final exam grades). We were now in the realm of interpretation, in this case teacher interpretation.

Knowing that humans are poor at prediction in such circumstances, and that levelling the data via algorithm would treat some students disproportionately unfairly, new thinking was required. This new thinking would have posed some really fundamental questions. What are exams for? What is fair in these circumstances, rather than in other circumstances? What’s the least worst outcome, given the dire situation in which we find ourselves?

If our politicians and experts had asked these sorts of questions, they may have realised that exam grades have a contained purpose and shelf-life. Their purpose is to help provide proof of attainment for the next step – no more and no less. They enable students to move on to what’s next: university places, college courses, first jobs. Their shelf-life is finite because once the grades have enabled the student’s next step, all their social and professional currency comes from what they do next. (Ask yourself this: when was the last time your school grades had any bearing on your attainment?)

Keeping sight of the impact of this next step would have eased the anxious belief that this year had to be exactly like all the other years. Because it isn’t like all the other years, and we all know it. It just had to serve the purpose of helping students in their next step in a year we will all come to remember as exceptional. I don’t believe students would ever have been penalised for this.

Leading in the age of uncertainty

So, what can we take from this as leaders? How do we apply these interesting lessons in heuristics and decision-making, and turn them into tangible actions that benefit our own organisations?

First of all, we must remind ourselves that we live in an age of uncertainty. More than ever before, leaders must exercise their judgement and decision-making less towards simple, linear, straightforward issues and events, but rather towards complex problems that require creative, imaginative approaches, and new methods for dealing with them.

Honing this skill of complex problem solving now is vital. The need to make decisions in a seemingly impossible conundrum will become ever more prevalent. Leaders’ ability to deal with these types of issues – whether in business or in politics – will be in increasing demand as more and more we use Artificial Intelligence and algorithms to make the kind of decisions that once were the remit of flawed human beings.

And as technology takes over that kind of decision-making, leaders will create value by instead thinking about the assumptions and values that underpin those decisions. Like the driverless car that must make a decision between two people in a head-on collision: which one to choose, and why?

Executive leaders have the luxury of outsourcing and delegating much of the work that gets done in organisations, but these are decisions that can’t be delegated. Are our leaders fluent enough in the deep thinking and complex problem-solving needed in the coming years? After all, this is already proving to be a decade of more change, disruption and turbulence than any other in human history.

The answers to these problems will never be easy – but most right answers come from truly knowing and understanding the assumptions that drive us. This fundamental perception shapes our truth, and the actions we choose to take.

It’s time for leaders of all persuasions to let go of the idea that there are simple answers to complex problems. A new kind of leadership foresight and reckoning is needed. Far beyond the exam grading question at the heart of this article, it is fair to say – our children’s future is at stake in every possible way.